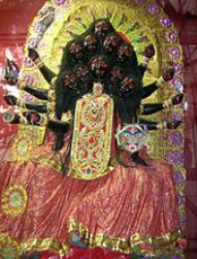 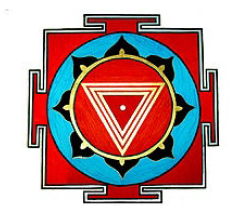 Most common four armed iconographic image shows each hand carrying variously a sword, a trishul (trident), a severed head and a bowl or skull-cup (kapala) catching the blood of the severed head. Eyes are described as red with intoxication and in absolute rage, hair is shown disheveled, small fangs sometimes protrude out of Her mouth and tongue is lolling. Kali has a garland consisting of the heads of demons she has slaughtered, variously enumerated at 108 (an auspicious number in Hinduism and the number of countable beads on a Japa Mala for repetition of Mantras) or 50, which represents the letters of the Sanskrit alphabet, Devanagari, and wears a skirt made of demon arms.